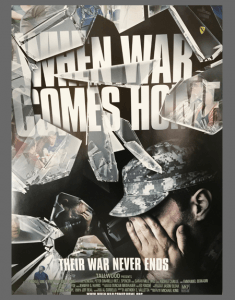 “Three Iraq/Afghanistan War Veterans return home to discover their Post-Traumatic Stress affects not only their own lives, but the lives of their wives, children and friends. Witnessing these powerful stories and many others, retired Four Star General Peter Chiarelli leads the search for better treatment for these invisible wounds of war.”

Deep in the heartland of Indiana, Wes Carlile, a former U.S. Army Chaplin’s Assistant during the Iraq War, was overwhelmed by the death of friends and fellow soldiers.  Returning home, Wes discovers his post-traumatic stress endangers his wife Andrea and their two daughters.  Seeking help for his survivor’s guilt through his church and the local VA Hospital, Wes attempts to seek redemption from his violent behavior.  Meanwhile, as affected family members, Andrea and the girls seek relief from their secondary trauma affect caused by Wes’s return.

Florida resident, Emmanuel Bernandin served as both a Naval Technician in Afghanistan and in a Naval detainee camp in Iraq. He was inflicted with PTS, from the guilt of surviving his fourteen fellow brother-in-arms in a massive suicide bombing in Afghanistan. After returning home, the affliction leads him down a path of attempted suicide and commitments to mental institutions.  He finds himself a burden on both his family and his girlfriend, Amanda, only finding solace with his dog, Bronze. Emmanuel’s struggle is to must break this cycle of despair in order to survive and lead the normal life he craves.

Living in the mountains of Colorado, Spencer Milo was once a Sergeant in the US Army until an injury from a suicide bomber medically retired him.  He now attempts to adjust to civilian life with his wife Sarah, his daughter, and the help of a service dog named, Nemo.  Spencer has crippling anxiety and is grossly over medication from doctors who are still struggling to understand the nature of his illness. Damaged both physically and mentally, Spencer hopes that a path of helping other veterans can help him cope with his trauma.

Acclaimed Director Michael King, Executive Producers Debby Hyde and Jennifer Harris, When War Comes Home, is a documentary feature film focusing on the lives of these three soldiers returning from combat. They search for the courage to overcome their demons and painful memories of war. The crusading efforts of Seattle’s retired Four Star General Peter Chiarelli to find better solutions for treating post-traumatic stress and traumatic brain injury is an on going challenge to provide the help our Veterans need.

The film puts a “spotlight” on how secondary trauma inflicts the Veteran’s families and children. As such the film provides insight to how post-traumatic stress affects our nation as a whole.