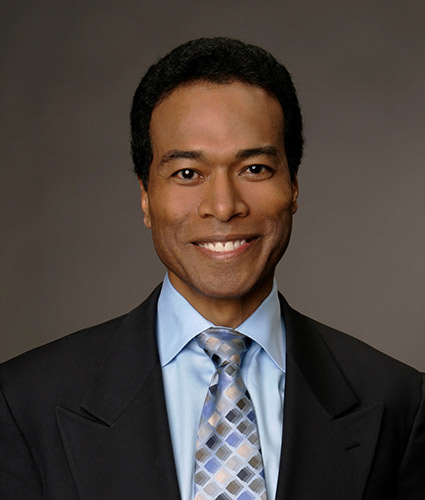 Val Nicholas is a former Vice President of MultiCultural Initiatives at NBC News. He is on the forefront of guiding on-air content and digital deliverables aimed at diverse audiences in both traditional and emerging formats. Building consensus among entertainment industry and government groups, he is a founding member of the Hiring Our Heroes and Got Your 6 veterans support initiatives, theGrio.com (an African American news site), NBCBLK.com and NBCOut.com.

Mr. Nicholas’s career in Television spans both Broadcast and Cable. From his beginnings in local station TV broadcasting, he has produced everything from news and sports to elections, talk shows and live events. Within NBC, he is credited with invigorating creative staff and developing an acclaimed approach to innovation. He has presented his creative principles to corporate audiences throughout North America and internationally.

During the years General Electric was NBC’s parent company, he taught his Maximum Creative session at GE’s Crotonville Leadership School where it was the school’s highest-rated class. It continues to be well received at NBCU/Comcast.

Mr. Nicholas has been with NBC since 1998 with a brief break in 2000 to work with ABC’s Creative Department. The recipient of 24 Emmy nominations and winner of seven, he was the developer and producer of Snap.com (commercial spot), which also won the prestigious international Best Commercial in the World award and AdWeek’s Best Commercial of the Year. Additional awards include three NBC Golden Peacock Awards, various Promax Gold Medallions and an Emmy nomination for brand packaging MSNBC/NBC.

Mr. Nicholas graduated with a Bachelor of Arts with Distinction from California State University and served in the U.S. Army Signal Corps of the 11th Armored Cavalry Regiment. Interests include music, outdoor athletics and Tae Kwon Do, in which he holds a black belt. He lives in the New York City area with his wife.