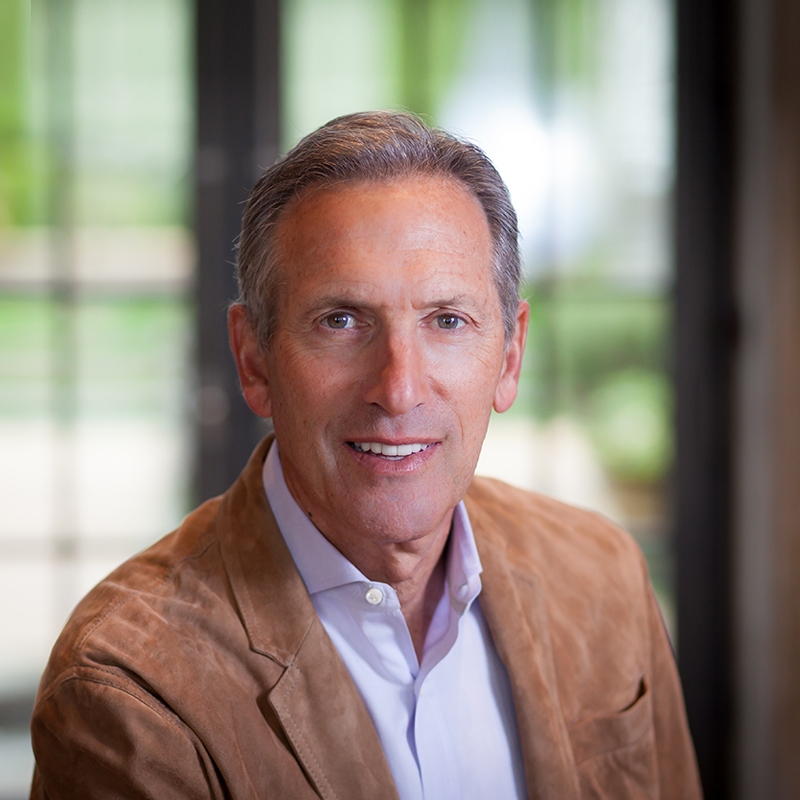 Recognized for his entrepreneurship and servant leadership, Howard Schultz built Starbucks Coffee Company into one of the world’s most recognized and respected businesses, a company committed to strengthening communities through human connection and social innovation.

Howard grew up in public housing and was the first in his family to graduate college. As a young entrepreneur, he set out to build a different kind of company, one that delivers business excellence through a culture of compassion. Under his leadership, Starbucks delivered approximately 18,000 percent in shareholder returns since its Initial Public Offering in 1992, while pioneering programs like comprehensive healthcare, stock ownership and free college tuition for all eligible employees. Today, Starbucks has 26,000 stores in 75 countries and ranks third on Fortune’s list of “World’s Most Admired Companies.”

For more than three decades Howard has redefined the role and responsibility of a for-profit, public company, proving that a business can exceed expectations by sharing success with its people and the communities it serves.

Howard’s Starbucks journey began in 1981 when he walked into the first Starbucks store in Seattle’s Pike Place Market and discovered a local business that was passionate about roasting the highest quality coffee. He moved from his native New York and joined Starbucks in 1982 as Director of Operations and Marketing. At the time, there were only four Starbucks stores.

One year later, on a business trip to Italy, Howard was captivated by the romance of the Italian coffee bar. He returned to Seattle with a vision of bringing the Italian coffeehouse tradition to the United States, creating a unique place for human connection and a sense of community. After leaving Starbucks for a short time to start his own II Giornale coffeehouses, he purchased six Starbucks stores and roasting facilities in 1987 with the help of local investors, beginning a global expansion that would change how the world consumed coffee.

Chairman since 2000, Howard resumed the role of president and chief executive officer in January 2008, with a renewed focus on Starbucks coffee heritage, innovation and enhanced customer experience. On April 3, 2017, Howard transitioned from ceo to executive chairman, shifting his full-time focus to social impact initiatives as well as innovation and global development of Starbucks Reserve® Roasteries and Starbucks Reserve® retail store formats. In June 2018, Howard retired from the company and assumed the role of chairman emeritus.

Along with his wife, Sheri, Howard is co-founder of the Schultz Family Foundation. He is also the best-selling author of “For Love of Country: What Our Veterans Can Teach Us About Citizenship, Heroism, and Sacrifice” (2014), “Onward: How Starbucks Fought for Its Life without Losing Its Soul” (2011), and “Pour Your Heart Into It” (1997).

Howard holds a Bachelor of Arts degree from Northern Michigan University. Before joining Starbucks, he worked three years in sales and marketing with Xerox Corporation and served as Vice President and General Manager of Hammarplast U.S.A. He is co-founder of Maveron LLC, a venture capital group.

Photo: Amy Correll Ornela Xhangolli can we use his photo from the Schultz Family Foundation page? I can’t seem to get it to save.