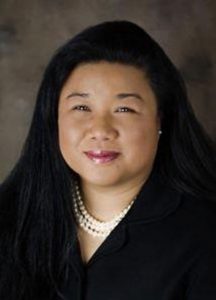 Sue Hoppin is a nationally recognized expert on military spouse and family issues working to bridge the cultural gap between government, private and public groups, and military communities. She is an advocate, published author, and consultant with more than 20 years of experience and expertise in military community programs. She has a proven record of developing programs focusing on military issues, serving as spokesperson for various organizations and committees, and reaching out to train top tier military-affiliated groups, veteran/military services organizations, and key leadership within major military commands. She frequently speaks around the country at conferences and leadership training programs.

In 2012, Sue was appointed by President Obama to the Board of Visitors of the United States Air Force Academy; she completed her tenure in 2018 as the board’s Vice Chairman. In 2010, Sue founded the National Military Spouse Network, a professional development and networking membership organization supporting the professional career and entrepreneurial goals of military spouses. Before founding the NMSN, Sue served as the first deputy director for spouse outreach for the Military Officers Association of America, charged with creating and spearheading military spouse initiatives for the 375,000 member association. In 2007, Sue co-authored, “A Family’s Guide to the Military” for the popular Dummies series; the book was selected for First Lady of the Marine Corp’s Recommended Reading List in 2012. In recognition of her accomplishments, Military Spouse Magazine named Sue on both their 2007 and 2008 Who’s Who of Military Spouses list recognizing those who have made significant contributions in the military community for all military spouses; making her the only person to be named on the list two years in a row.

Sue is an avid volunteer having served on as the President of the Madeira School Alumni Council (2017 – present), Board of Directors for Blue Star Families (2010 – 2013), and as Military Family Liaison to Fairfax County School Superintendent’s Business and Community Advisory Council (2009-2012). Recognition for her volunteer efforts include: Nominee for USAF’s Joan Orr Spouse of the Year (2007); 76th Airlift Squadron Spouse of the Year, Germany (2002); Volunteer of the Year at McConnell AFB, KS (1999). For 9 years, she served as the Publicity Chairman on the Air Force Charity Ball Committee that has raised over $7.5 million for the Air Force Aid Society since its inception in 2004.