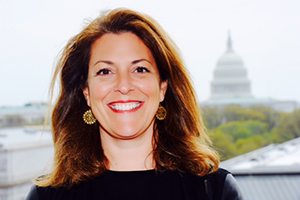 Heather O’Beirne Kelly is a clinical psychologist and the Director of Military & Veterans Health Policy at the American Psychological Association, where since 1998 she also has served as Senior Legislative & Federal Affairs Officer in the Science Government Relations Office and Director of the APA Executive Branch Science Fellowship. Kelly advocates for behavioral science on Capitol Hill and in federal agencies, including the Department of Defense, Department of Veterans Affairs, Department of Justice and the National Science Foundation.  She sits on the Executive Committee of the Friends of VA Medical Care and Health Research Coalition; represents APA on the VA Office of Mental Health Services Stakeholders Group; has testified before Congress regarding funding for VA research and mental health services; and has coordinated numerous Capitol Hill briefings on topics of interest to military and Veteran populations, including suicide prevention, PTSD, and traumatic brain injury.