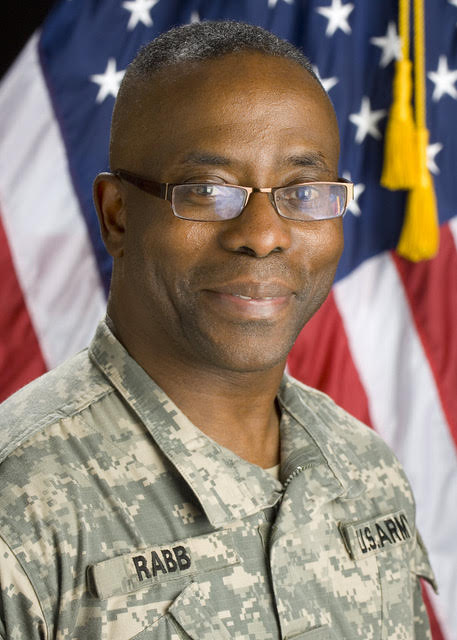 David Rabb is a retired U.S. Army Reserve Colonel and social worker. His last position was as the Commander of the 113th Medical Detachment – Combat Stress Control – located in Garden Grove, CA.  The primary mission of a combat stress control unit is to treat Soldiers with operational combat stress, grief and loss, and battle fatigue.

In July 2012 his unit returned from a one-year deployment to Afghanistan.

Prior to this assignment, COL Rabb served on active duty as the Director of Psychological Health for the 63rd Regional Support Command in Mountain View, CA, 2009-2011.  His primary responsibility was to maintain oversight of the psychological health of 40,000 Reserve Soldiers in units located in a seven-state southwest region that were either deploying to war or returning from war.

From 2007 to 2009, he served as the U.S. Army Western Region Medical Command Care and Transition Coordinator and worked at the VA Palo Alto Health Care System/Polytrauma Center as a VA/DoD Military Liaison.

He also served as a guest lecturer for the National Center for PTSD at Menlo Park and a military consultant to The Pathway Home, Inc., in Yountville, CA.  The Pathway Home is a comprehensive residential care treatment program that serves military personnel and veterans that were deployed to Iraq and Afghanistan and struggle with Post-Traumatic Stress (PTS), Traumatic Brain Injury (TBI), and other combat stress and other mental health challenges.

From 2004 to 2005, COL Rabb served in Iraq as Commander of the 785th Medical Company, Combat Stress Control from Fort Snelling, MN. Due to his unit many accomplishments in Iraq, his unit earned the U.S. Army Meritorious Unit Citation.

COL Rabb is married to Kim Rabb and has four adult children and two adopted children (ages 12 and 14).  He and his family reside in Minneapolis, MN and San Diego, CA.