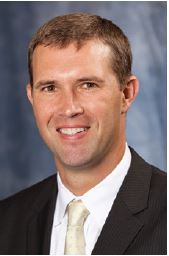 Eversole leads Hiring Our Heroes, a grassroots initiative to help veterans, transitioning service members, and military spouses find meaningful employment in communities across America. Eversole strategically engages the program’s private- and public-sector partners in an effort to connect businesses to the talented men and women transitioning out of the military as well as their spouses. He also serves as a senior adviser to the U.S. Chamber of Commerce Foundation.

For nearly two decades, Eversole has shown a strong commitment to the military and the men and women who serve. He first entered military service in 1994 as an enlisted security specialist in the Indiana Air National Guard. Eversole later accepted a commission in the United States Navy JAG Corps in 1998 and served on active duty until 2001. As an appellate attorney, he represented more than 250 sailors and Marines before the Navy-Marine Corps Court of Criminal Appeals and the Court of Appeals for the Armed Forces.

Eversole transferred to the Navy Reserve in 2001. He now serves with a Navy Reserve unit supporting the Navy Personnel Command and holds the rank of commander. He is a recognized expert in military justice.

As a civilian attorney, Eversole served as a litigation attorney in the Voting Section of the U.S. Department of Justice, Civil Rights Division. He investigated and litigated cases to protect military voting rights under the Uniform and Overseas Citizen Absentee Voting Act (UOCAVA). Subsequently, he served as a special counsel for a presidential campaign and provided counsel on state and federal election issues.

Eversole founded the Military Voter Protection Project (MVP Project)—a program dedicated to promoting and protecting the voting rights of active duty military members and their spouses. In addition, he was an adjunct professor for the AMVETS Legal Clinic at Chapman University, which provides free legal representation and support to active duty service members and veterans.