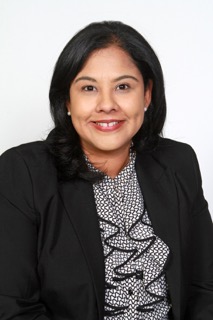 Roxana Delgado, PhD, is a health scientist and the wife of US Army retired Sergeant First Class Victor L. Medina. SFC(Ret.) Medina, a combat wounded Veteran and Purple Heart Recipient, was wounded in Iraq on June 29, 2009. He sustained a moderate traumatic brain injury (TBI) resulting in long-lasting physical and cognitive disabilities. Since his injuries, the couple decided to reach beyond their own struggles and stand up for others, a mission that would eventually result in Congressional recognition for their efforts to help improve the system of care for TBI. The couple identified gaps in TBI identification, diagnosis, and treatment, which they brought to the attention of military and civilian leadership to help shape new military healthcare policies. Dr. Delgado is active in the military and veteran caregiver community and is a 2015 Elizabeth Dole Foundation fellow representing the State of Texas. Dr. Delgado co-authored the “The Caregivers’ Companion” book and is currently a Fellow at the Military Health Institute and Department of Epidemiology and Biostatistics, University of Texas Health San Antonio.