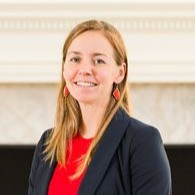 Prior to joining Hiring Our Heroes, Anna worked as a Human Resources manager after graduating from West Point. While on active duty, she served in both Texas and Iraq, eventually transitioning to the civilian sector where she worked in personal finance.

In addition to her current role at Hiring Our Heroes, Anna continues to serve in the Army Reserves, working as a part-time Assistant Professor of Military Science at Texas A&M-Kingsville. She is pursuing her MBA at the University of Virginia’s executive program and is also a proud military spouse.